Somebody's running for the office of God...

Gnostics and atheists have one thing in common: appreciation for comedy. And lack of reverence for the deity who created our material world because we see plainly just how jacked up it is. We hold Him accountable for His mistakes- we don't worship him because of it or make grand assumptions that There Is A Deeper Purpose behind those mistakes, because we know there's not.

When I read the latest blog post of my favorite atheist I knew(blog author Dromedary Hump) I had to share it with you. Keep the convoluted laws of the Old Testament in mind as you read. 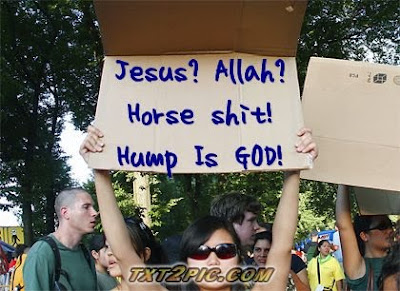 Over coffee this morning I was thinking that I have all the necessary qualifications to establish my own godliness, even have people pray to me and worship me. So I have been pulling my resume together. Here’s what I have so far:

June 2007: My eldest son and his wife disobeyed me when I told them not to touch the bowl of dried banana chips. I threw them out of the house and told them they are cursed for life. They didn’t take it well.

September 2007: I decided I didn’t like the way things were going in my town. I blew up the damn which flooded the entire region killing every man, woman, child and animal in the county except for my friend Gary, his wife and child and their three Boston Terriers. They’re the only folks I liked.

January 2008: I convinced this “mentally challenged” guy that unless he killed his own son with an axe that I was going to heap some bad mojo on him. He was just about to lower the boom on the kid, when I stopped him at the last second. I was just testing him. He may have soiled his pants, I know his kid did. It was a hoot.

March 2008: My followers and friends needed some rules, so I came up with my "Top Ten List of Stuff Hump Wants You to Do.” I made sure the first four rules were all about me. Hey, I have a fragile ego.

May 2008 - August 2008: Lots of little things were pissing me off during this period. Maybe it was the heat, maybe I was just cranky, I dunno. Things like folks wearing their damn polyester/cotton blend clothes; people eating lobster with butter and lemon; farmers cross breeding cattle to get more milk production; men giving other men hand jobs, same with women; lots of other stuff like that that had no rhyme or reason … hundreds of them. So I decided those things are illegal around here. I’ve directed my followers to kill those who do the stuff that really irks me. No Damn Gleaning Fields on Thursdays During Baseball Season if you value your life, damn it!!!

November 2008: This big extended family down the road didn’t think much of me and my followers. They practiced some strange ways, ya know? I think they are Asians. Probably pagans. Some of them actually ate lobster salad with mayo on hot dog buns! Disgusting!!

So I told my friends and followers to set their house on fire and kill every one of them; their dogs, cats and farm animals too! I told them it’s ok to make an exception for the little girls. Hey, my friends like ‘em young. I tried to get my friends to wipe out the Town of Bellows Falls, Vermont too, but the town’s two cops had those aluminum meter maid electric carts, so they were too powerful for us.

March 2009: I decided to have another son. Mrs. Hump became hysterical at the idea and threatened me with a knife. I had no idea how to find myself a wife of child bearing age on short notice -- and my inflatable Mary doll wasn’t in any position to reproduce. So I snuck up on some stoner chick, gave her some Ruffies and nailed her. She never knew what happened. Late in December she gave birth to our son. She figured it was a virgin birth. Hey… I wasn’t about to confess to anything, so I let her think that.

January 2010: I was thinking my young bastard son is gay. I wasn’t sure, but he was spending all his free time with this group of a dozen or so effeminate guys with long hair and playing his X-Box. (I’ll admit he has remarkable control of that thing for a 13 month old, damn miraculous!)

So to make him prove his manhood I told him to get himself all worked up and pissed off, and inject some neighbor’s goats with anti-freeze and have them jump off a cliff. He did and they did. Then, to have him prove he’s no pantie waist tree hugger, I told him to kill a pear tree for not having pears on them. He babbled something at first about my being an idiot because there are no pear baring trees in January in New Hampshire. But he killed the tree anyway. He’s a good boy, bit of a smart ass and given to hissy fits though.

Spring 2010: I plan to have my little bastard son tortured to death, to show what a compassionate and caring guy I am to my followers. No doubt he’ll get a little rattled toward the end, but he’s a skinny kid and probably won’t last too long… three or four hours, max. He’s resilient though so who knows -- some defibrillator shocks and he might come back. “CLEAR!!”

Here are a few of the funny comments to the blog post so far.

Dear God. Hump is goin' to hell. The End. Let the outrage begin!

P.S. What is wrong with butter and lemon with lobster? Have I been doing it wrong all these years?

Deuteronomy 14:9-10 says:
These ye shall eat of all that are in the waters: all that have fins and scales shall ye eat:
And whatsoever hath not fins and scales ye may not eat; it is unclean unto you.

Now go, my child and sin no more.

Hump,
For one, if you want to be my new god, you're going to have to come up with some pretty good circular argumentation. Secondly, what kind of afterlife benefits do you have?
Here's what I'm looking for in a deity. You're going to have to beat beer volcanoes and a stripper factory just to outdo the FSM, and let me tell you 72 camel toes won't cut it. Also, you're gonna need some chosen people. If I happen to be one of those chosen ones I might consider it (I love feeling better than everyone else).
You might also have to convince me that you have healed my diabetes, and a new guitar would really sweeten the deal, but maybe I am pushing it a little.
zar
p.s. what happens if I say Drome Dammit(!) ?

I'm not even ready to launch my campaign and already you're nailing my hump to the wall.

Remember, once made God, I get that 100 day honeymoon period to get my act together.

Why did the lard make shellfish if he hates them? I can get why the lard would be into butter, though. I'm all confoozled again.

Hey, why'd he make pigs if he hates them? There's no accounting for the crazy stuff the ancients decided their god hates.

I mean, their god hates people wearing cotton and flax blend garments. What's up with that? Is he worried about the dry cleaning bills?

"Remember, once made God, I get that 100 day honeymoon period to get my act together."

Wait-a-hump-damn-minute! 100 days - are those the millennial long days each? Or are the epochal days? Ya know, we ain't gonna wait 'round no 2 billion years while you vacation.

Mixter,
Thanks. You may be Disciple material :)

NEBob...
you and Zar are putting too much pressure on me. I was planning to ease into the deity thing.

As a Camelian Biblical Literalist, the 100 days are of the 24 hour variety. None of that liberal theist "100 days = 2 billion years" crappola for me.

Amateur. You haven't done that 10 plagues thing yet. And if you want to be my chosen deity, what's in it for me. FSM has a stripper factory, which is alright for dudes and lesbians, but what about us hetero females? What's in it for us? Do I get an endless supply of the Old Spice dude? Eat bonbons and drink cokes all day and still maintain a smokin' hot bod? Seriously. You've only appealed to my sense of fear thus far. What's in it for my sense of greed?

In danger is thee who angers The Hump!

How dare one question his Humpness or make demands thereof.

Do ye knoweth not that the Hump works in mysterious ways?

You shall receive that which is right in the Humps eyes.

The Hump is all knowing! The hump reviseth his soul contracts as he wishes. Again, how dare you question!

The Hump knows that which is right for thee.

You are all in danger of eternal damnation, suffering the never ending line of Starbucks! Forever and ever, even for ever and ever.

-------------------
BTW: Lord Hump,
As things go wrong for people, not understanding your infinite wisdom, they will become angry with you when they do not approve of your proscribed outcome to their prayer request. This could lead to a drop in your overall approval rating.

Might I suggest you play the game of good supernatural being / bad supernatural being. Create a new cabinet position and office. The office might be titled: "Sorry All Things Ain't Nice" or SATAN for short. To this office you divert blame when people get pissy about your divine plan.

That's all for now...I'll be back later