This footage was filmed in Lakeland, Florida at 4:45 pm on 12/29/10. I opened my front door and looked up into the sky. There they were, plain as day.

This set of videos are shown in chronological order. I had to shoot in several segments(eight, actually) because I was walking around down the street trying to find the best angles with the sun where it was at that time of day.

I wanted to splice together all the vids but haven't had such great luck in the tech department with it. Just watch the vids from top to bottom and you'll see it as it's meant to be seen.

There are a total of eight vids but I'm only listing the more vivid ones here. Check out GU's YouTube channel to see the rest. www.youtube.com/user/GnosticUnrest

These were shot right outside my front door.

These next two videos were filmed an hour later, driving into town on Highway 98North at 5:45pm.

When you hear me say, "remember Key West?" in the vid right at the end, I am referring to the same type of aerial spraying done around the time my father was stationed at the Naval base there. The huskier voiced woman you hear me talking to is my mother. As you heard, even she could immediately tell there was something unnatural about them. She pointed out the difference between contrails, "mare's tails," and this mystery soup stuff up there in a grid-like pattern.

The reference to Key West goes thus: in the 1980's the story leaked out that the military planes were doing what they called "population mobility experiments" in relation to sickness and evacuation or trends in movement. When you're attempting to study what people will do in a bad situation- do it on an island. People who have limited escape routes will automatically panic the worst. Pandemic studies, they're called. My mother saw and experienced them first hand. According to her, they never did 'fess up to what was in the stuff that was sprayed but only stated that it was 'viral' in nature.

In this next vid you can see the sheer size of these chemical tracks in the sky when driving in a moving vehicle and when compared to buildings. Very sharp footage. There are literally NO OTHER CLOUDS in the sky except for these chemtrails!!

I have noticed an interesting trend about chemtrails just in my own local experience-- right around two days after chemtrails appear, it rains. Hard. Like, a gushing downpour of kitties and puppies from the sky. Anyone else notice this or have experience with it? Very odd this time of year, even for Florida.

Like a lot of you, I have been watching the news concerning affairs in Egypt the past few weeks. Found some enlightening pictures online, too!

Today in an article: Asked about U.S. President Barack Obama's counsel for him to leave office swiftly, Mubarak said he told him, "You don't understand the Egyptian culture and what would happen if I step down now."

Yeah, buddy. I know what you mean. All those youngsters today below the age of THIRTY! What the hell do they know about what's good for them? They see the world going to shit all around them and lo and behold- on YouTube and Facebook there are concepts totally unheard of in their hometowns. Of course they're jealous.

They see us enjoying the ability to kiss whomever we want without sharia law prompting acid being thrown in your face. Or Googling(I hate the fact that this word is now a verb) information on anything from illegal whaling practices to Justin Bieber. (ACK. I can't believe I just wrote that.)(The last part. 'Cause he's just kinda weird looking with the whole 'I just got swirlied' hairdo.)

In any case, Egyptians are pissed. Jealous mad pissed and they have a right to be. Thirty years is too long to have one guy looking down his hairy nose at you. The people have spoken: with Molotov cocktails no less. And spray paint. And when the spray paint and alcohol ran out they resorted to throwing sticks and stones. They haven't let up yet and to them I tip my hat. They deserve the right to choose their representatives.

These pics were priceless, although the political implications in a few of them did leave me asking quite a few questions and none of them good. 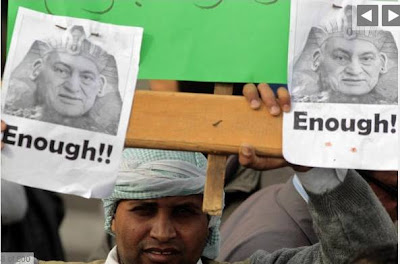 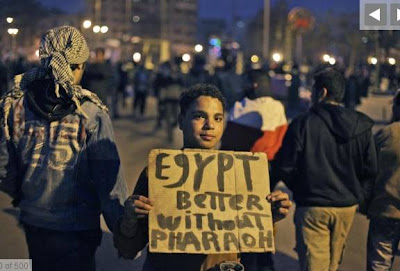 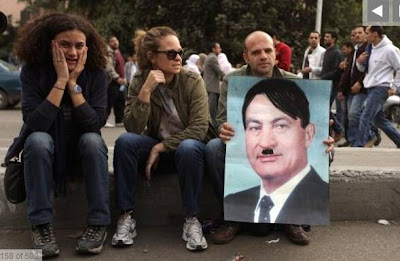 Very cute. I can totally see the resemblance! 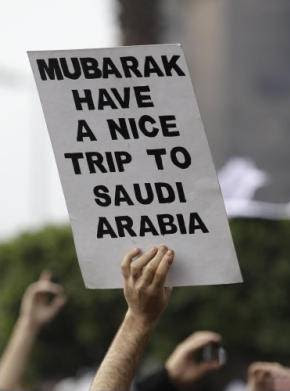 As opposed to Argentina or some other South American country hide-away? hmm.... 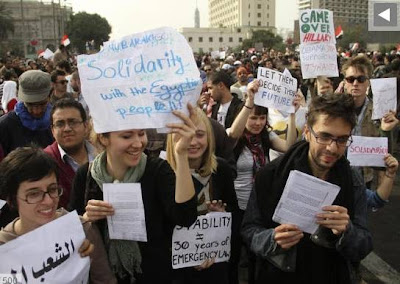 Catch that sign in the far right? It's about our beloved White House couple. Here's the sign blown up a bit bigger:

"Game over Hillary. Obama stop supporting Tyranny." Or is that Tyrants? Kinda fuzzy. But the effect is the same. 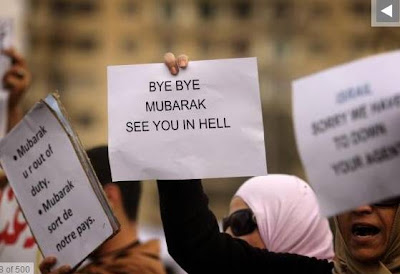 It's not the message on the signs that have me worried it's the number of pictures I saw with Muslim women looking awfully pissed off in their hijab. I think we should be very concerned with the power vacuum when Pharaoh leaves office. 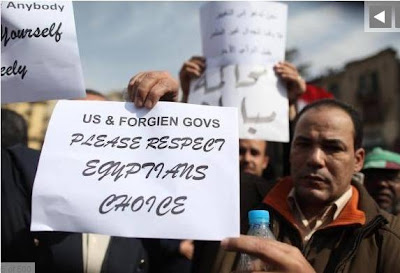 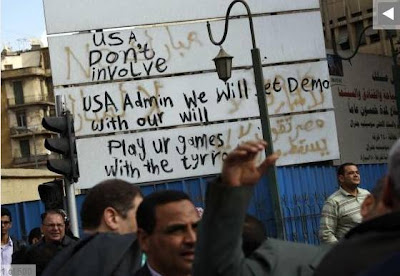 I'm sensing that Egypt is going to become the new South Vietnam.
Posted by Angel at 12:20 AM No comments: