The Gnostic Universe At A Glance

This article is an addition to the Gnostic Definitions segment on the side column. I've put together a few diagrams to assist in this. Please forgive the small format of these pictures as they were created using Microsoft Paint. Simply double click on the images to bring up the details closer to you. You can even right click and select "Open in new window(or tab)" so you can flip back here to the definitions as you examine the diagram.

This first diagram depicts the more common "onion" gnostic universe scheme. Humans(and other sentient creatures in the universe) being the center focus and moving outward we have the Archons, the Demiurge, Sophia, the Aeons, and finally the All which is everywhere and in everything, including humans. In depth definitions of these personalities are further down. 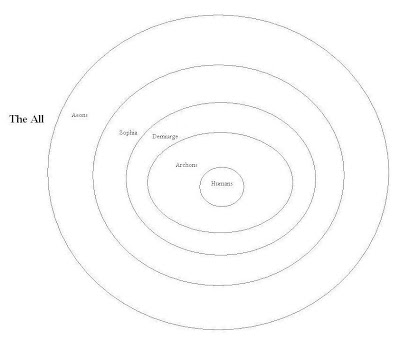 Next, we have a depiction of the Gnostic Universe but with a variation commonly seen in the Cathar sect. In it, the All is on equal footing with the Demiurge and equal space is occupied by them. Humans, Archons, Sophia, and the Aeons are all found within the center overlapping design. 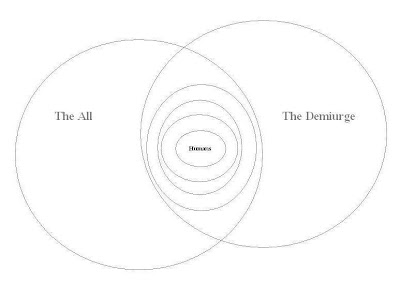 There is a slightly more rare design of the Cathars which depicts a triune of the All, the Demiurge, and Sophia in three large interconnected and overlapping circles. The Aeons, Archons, and Humans would be in the very center.

Moving from the outer to the inner circles, here are definitions:

Aeons: emanations of The All. In the various systems these emanations are differently named, classified, and described, but the emanation theory itself is common to all forms of Gnosticism. They are described as existing in layers(like an onion) between human beings and The All. Complex hierarchies of Aeons are thus produced, sometimes to the number of thirty. These Aeons belong to the purely ideal, noumenal, intelligible, or supersensible world; they are immaterial, they are hypostatic ideas. Together with the source from which they emanate they form the Pleroma ("region of light"). The lowest regions of the Pleroma are closest to the darkness—that is, the physical world.

Sophia: Greek for "wisdom." This female personality is a bit tricky to pin down. In some Eastern Orthodox Christian sects she is seen as the Virgin Mary. In some gnostic texts she is also known as Eve, in that she was duped or made a mistake which lead to the flaws and separation of man from God. In others she is described as the female child of the Divine Principal. There are correlations between these variations but some are subtle while others are more blatant. The cross over from the Christian tradition into the Gnostic tradition is that "Eve" was the first female child of a god and so was Sophia. Both gave birth. Sophia's childbirth was virginal whereas Eve's was not. So this calling Sophia "Eve" is more of a half-truth based descriptive, merely letting readers know that Sophia was The First of her kind.

The gnostic Sophia was formed out of the mind of The All. Sophia then makes a decision to do some action(text explanations vary widely) and in the process of attempting this, she creates the demiurge(God/Yahweh). Embarrassed, and fearing reprisals from The All, she hides Him away in a void all by himself. God, thinking he's all alone and the only god in existence creates the earth and heavens as well as human beings to worship Him. That's the extremely short and sweet version.

Yahweh/God/Jehovah/demiurge/the arrogant one: the Judeo-Christian God described in the New Testament who said in Exodus, "for I, Yahweh your God, am a jealous God." The child of Sophia. The one who formed the universe from the elements pleroma made. Also known as the "half-maker" because he had taken the divine substance and fashioned out of it a world. He is the spiritual being who had become forgetful of his origins, even of the ultimate God. He thinks that he is the totality and there is no other God before him.

Archons: servants of the demiurge. False rulers. The angels and demons of the Old Testament. The lures and distractions of this material world.

this is a whole new concept to me and is a bit harder for me to digest /pull into a cohesive concept than most religions I've studied.

I'll do some idependent reading to broaden my education. Don't know how Gnosticism escaped my attention all these years.

LOL that "thanks.. I think.." sentiment is pretty common when being brain-slammed with something this insanely different.

If it's any consolation for you, when I first saw diagrams of this gnostic concept it gave me a headache for days. I couldn't ... what's the word...reconcile?.. the somewhat abstract concept of the diagrams and the definitions themselves. It took me a while to orient my brain correctly and not think of it so much as Literalist vs. Gnosticism because the definitions themselves of these terms are so drastically different. The boogyman isn't the same boogyman, ya know? So toss what you know and what you think you know about those words out the door. Let the garbage man take them down to the county dump 'cause you don't have any use for them in the study of gnosis.

Now I've got a diagram I am working on and it is kicking my butt. Stupid, really. Literalist Christianity. I'm stumped, Hump. What the hell? Why is this so hard?

Angel,
any of these of help?

You are so awesome!!!! YES! Those are exactly what I'm looking for. Thanks!

This one is my favorite :)

You're not going to believe this but when I opened up that first link you gave which contained the multitude of pages to choose from... THAT was the first diagram I clicked on and proceeded to laugh myself silly. It's true, though, isn't it?

Oh if we can't laugh about religion then what can we? Oh, right. The platypus. That's always a good laugh.

did you know that the word Aeon in greek "αιών" means century?...
very nice article...congrats!

Sofia on the other hand...reminds me the story of Athena(Minerva)who was born from Zeus head...

Thank you, Seroana Akerne. I am glad you enjoyed the article. A lot of what I write about is me trying to get a grip on these concepts. So like my own life, it's a work in progress.

Metaphors on top of metaphors on top of historical interpretation of natural phenomena or simply man's musing of what's behind the curtain.... that is exactly the reason why we're so lucky the Nag Hammadi codices were found! It puts true historical gnosticism into perspective when all we've had to go on until the fourth and fifth century were Irenaeus' words in his hateful books.

I think you're correct about Athena/Minerva. Sophia has always been difficult for me to understand but put in that context, yeah. It makes sense. Sprouted full form from her father. Perhaps she is simply the Mother in Mother Nature whereas the All encompasses both male and female aspects as one in the same. The demiurge is often thought of the male/dominant aspect but when you separate out the demiurge from the equation then you get a sense of the totality of 'salvation' we were meant to have. Sophia may have been the female creative force aspect of the All; the female half of his personality.

Aeon has a lot of different meanings which have been used by a multitude of philosophers, scientists, and clergy through the ages(ages: another meaning of aeon! lol). I love etymology.